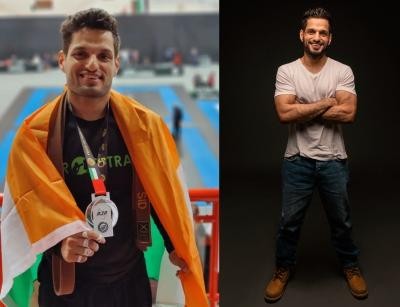 New Delhi,  From completing an M.Sc in International Strategy and Economics (ISE) with distinction in 2005 from the University of St Andrews, UK, to winning a silver medal at the World Jiu-Jitsu Championship in Dubai 2022, Siddharth Singh's journey so far has been no less than the script of a Bollywood movie.

There have been so many incidents in the roller-coaster life of Siddharth Singh, the flag-bearer of Indian jiu-jitsu, that a few years back he felt like leaving the sport.

But with sheer dedication and a dream to achieve something special in a lesser-known sport, Siddharth passionately continued and became the only athlete in India to win a 'Brown Belt' in Brazilian jiu-jitsu, which he thinks played an important role in his life.

The 35-year-old, who is currently preparing for the World Jiu-Jitsu Championship scheduled to be held in Russia in November 2022, said that he is hopeful to win the title.

Siddharth, who developed an interest in combat sport during his Doon school days, said, "My only focus is now to win title in the World Jiu-Jitsu Championship in Russia. In the last championship in Dubai, I won the silver medal, I want to win the gold this time. If I am able to do this, it would be very helpful for me as well as for the Jiu-Jitsu sport in India."

After completing his education in the UK, Siddharth started working for a top British top fashion and lifestyle brand. On visiting his family in Delhi, he realised the lack of training centres for jiu-jitsu and Mixed Martial Arts (MMA) in the country and quit his job to pursue and promote the sport in India.

Explaining the decision, the winner of British BJJ Championship (Manchester 2018) said, "I had a decent job as a manager for the sports and lifestyle brand, everything was perfect but I missed the sports during my work. The motivation was to come back and change how we see mixed martial arts. Coming from a middle-class family, it was very difficult for me to convince my parents, but everything became fine once I started to win the national and international level titles."

"Initially it was very difficult for me as there were no trainers and coaches around for MMA or jiu-jitsu, so I decided to establish a training academy in Delhi where I along with others can do training and pursue the sport," he added.

When asked why the world title is important for him, he said, "About 13-14 years ago, I brought this sport to India. I told people that this is also a sport in which we Indians can do a lot. I set up an academy by putting my all into it and started training many people.

"If I wanted, I could have played it while staying abroad and made my career there. But I didn't do that. When I went to fight abroad, people used to wonder about jiu-jitsu fighters from India!"

"But after a few years, the scenario started to change and now Indian fighters also go abroad and perform well. I won silver last March at the World Championships in Dubai, due to which now people are getting interested in this support. My win is also important because it will help people to know that there is a player who has helped MMA to get established in India," Siddhart, the winner of ADCC Taiwan Champion 2018, said.

Siddharth, who runs the Cross-train Fight Club in India where he trains young players, signed off by saying that the future of MMA and Brazilian jiu-jitsu in India is very bright.

"I am very optimistic about the growth of the sport. I 'hink, in the long term it's going to be a very popular sport. In the US, MMA and BJJ are the fastest growing sports as it has all the gradients for popularity. Being of a combat nature like boxing and wrestling, I think in the coming days jiu-jitsu and MMA will be very popular in India," he said.