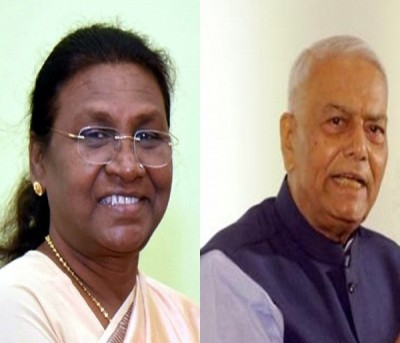 Ranchi,  It is a unique coincidence that both the presidential poll candidates -- Droupadi Murmu and Yashwant Sinha -- share a deep connection with Jharkhand.

Murmu, who has been declared a presidential candidate by the NDA alliance, has previously served as the Jharkhand Governor for six years, while Yashwant Sinha has been a three-time MP from Hazaribagh Lok Sabha constituency in Jharkhand.

Droupadi Murmu has remained with the BJP, but Yashwant Sinha, who was previously a national-level BJP leader for nearly two decades and a minister in Vajpayee-led government, left the party and was with the Trinamool Congress before resigning to be a candidate for the President's post.

Now exactly a year later, in July 2022, the ruling NDA alliance has nominated her for the country's highest constitutional post.

Born on June 20, 1958 in Odisha to a simple Santhal tribal family, she started her political career in 1997 being elected as the Councillor of the district board in Rairangpur, Odisha.

Prior to joining politics, she had worked as an honorary assistant teacher at Sri Aurobindo Integral Education and Research, Rairangpur, and as a junior assistant in Odisha Irrigation Department before joining politics.

Murmu was elected twice as an MLA in Odisha and also got a chance to work as a Minister in the Naveen Patnaik government when the BJD-BJP coalition government was in power.

She was also awarded the Neelkanth Award for the best legislator by the Odisha Legislative Assembly.

The Opposition Presidential candidate, Yashwant Sinha started his political career in 1984 after taking voluntary retirement as an IAS officer.

He was fielded as a Janata Party candidate from the Hazaribagh parliamentary constituency in the 1984 Lok Sabha elections, but faced a huge electoral defeat. Later in 1988, he was elected to the Rajya Sabha and served as the Union Finance Minister during the Chandrashekhar-led government at the Centre.

In 1995, he joined the Bharatiya Janata Party and was fielded as the party candidate from the Ranchi Assembly constituency. Thereafter, he became a member of the Bihar Assembly.

Later, Sinha was also elected as the Leader of Opposition in the Bihar Assembly.

However, only after a year and a half, the BJP decided to nominate him to the Upper House of Parliament.

Later, he was elected to the Lok Sabha from the Hazaribagh constituency in 1998, 1999 and 2009. He also served as a Cabinet Minister during the then Vajpayee government at the Centre.