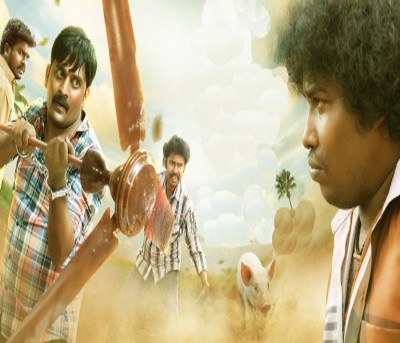 Lyca Productions, which is producing the film, shared the link to the trailer on its Twitter handle. "Here's presenting the fun-filled trailer of 'Panni Kutty'. Get ready for a rooted fun ride at the cinemas from July 8th onwards," it said.

The trailer of the film, which has been cleared for release by the Censor Board of Film Certification with a clean 'U' certificate, gives away the fact that the story of the film is about a piglet owned by Yogi Babu.

Panni Kutty, which means piglet, has a series of comedians playing pivotal roles including well-known Tamil orator and comedian Dindugal Leoni, who will be making a comeback to Tamil cinema after almost 20 years.

Leoni plays a character called Kodangi in the film, the theatrical rights of which for the states of Tamil Nadu, Kerala and Karnataka have already been acquired by Dr. Prabhu Thilak's 11:11 productions.

Shot by cinematographer Sathish Murugan, Panni Kutty has music by K and been edited by director Anucharan himself.