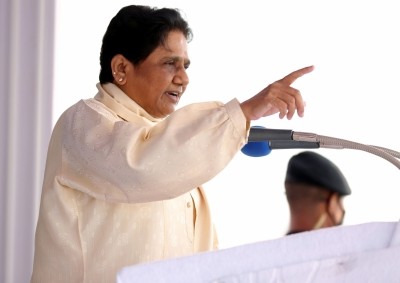 Lucknow,  If indecision is the hallmark of any political party in the present times, it is the Bahujan Samaj Party (BSP).

The party which has been on a downslide since the past one decade -- losing seats and votes with an alarming frequency -- remains completely undecided about its political posturing.

BSP supremo Mayawati has been juggling with her vote banks with statements that contradict her own words, and this has led to utter confusion in the ranks.

She issues statements in favour of minorities and then goes on to field a candidate that will ease the victory of BJP in Azamgarh.

She strides on to the stage at a party meeting, holding a trident in hand, and then tweets about secularism in politics.

The BSP President shooed away all major Dalit leaders from her party and believed that Brahmins would help her regain the glory of 2007.

When that did not happen, Satish Chandra Mishra -- the No. 2 in the party -- has been gradually pushed into oblivion.

Mayawati is now left without any 'friends' in UP.

She has ridiculed the Congress and attacked the SP -- both her one-time allies.

Her own vote bank has shifted substantially to the BJP, but the fear of known and unknown keeps her away from making an aggressive bid to reclaim her base.

Mayawati is ploughing a lonely furrow and this is entirely her choice.

Her strong sense of insecurity makes her remain within the confines of her ivory tower.

She does not meet party leaders, party workers and other political leaders. Her interaction with the outside world is restricted to a tweet a day and her press conferences are a one-to-one affair with a single news agency.

"Today, when politics has become a 24x7 affair, Mayawati refuses to meet anyone -- not even her own leaders. She has become completely disconnected with ground realities and this is responsible for the party slipping into a non-entity," said a former BSP MLA.

A one-time associate of late Kanshi Ram said that Mayawati has frittered away the ideology of her own mentor and has experimented with the upper caste, which demolished all that the BSP stood for.

"What makes her think that Dalits will accept a Brahmin as their leader? She has insulted all Dalit leaders, and she now wants the voters to accept her nephew and brother. Mayawati has single-handedly destroyed the legacy of Kanshi Ram, and those who believe in him will never forgive her," he said.

A Congress leader, who was earlier in the BSP, said, "Every political leader in the country knows that Mayawati is an unreliable ally and no one wants to strike a friendship with her. Besides, now that half her vote-bank has drifted away, she no longer holds the key to power."