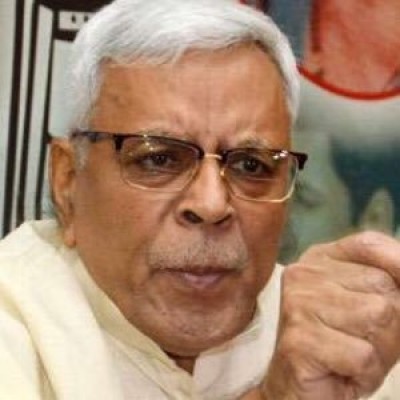 Patna,  With the Lok Sabha elections less than two years away, IANS spoke to veteran politician Shivanand Tiwari, vice president of the Rashtriya Janata Dal (RJD), to get an insight into the party's preparations to counter the BJP and the JD-U in Bihar.

Excerpts from the interview:

On the 2024 Lok Sabha elections

Shivanand Tiwari: There is no doubt that Lok Sabha election 2024 is the first target for the BJP and Narendra Modi. Accordingly, they are making all the 0political moves in the country. You have seen two very important by-elections in Uttar Pradesh at Azamgarh and Rampur which were the strongholds of Akhilesh Yadav and Azam Khan respectively and the BJP won both the seats.

Azamgarh is considered as the traditional seat of Mulayam Singh Yadav and Akhilesh Yadav. Both father and son were elected as MPs from Azamgarh. Similarly, the Rampur seat is a stronghold of Azam Khan. People of that region said that Azam Khan has the capacity to win elections even while being in jail. Despite all that, the BJP managed to win both the seats. Hence it is clearly visible that there are challenges for anti-BJP forces in Uttar Pradesh.

On the Bihar perspective

Shivanand Tiwari: As far as Bihar is concerned, there are three political forces, the RJD, JD-U and BJP and all of them have individually contested elections in the state. The message of those elections clearly indicates that when two parties come together in any election, they ascend to power. Now, the JD-U and the BJP are on the one side and the third party is led by the RJD and it has good support from the Left parties. Now, the strength of the RJD improved after 4 out of 5 MLAs of the AIMIM joined our party.

Shivanand Tiwari: During elections, the leaders of the BJP and other parties always pointed out the Jungle Raj under Lalu Prasad Yadav. There are no other issues the BJP and others have to target the RJD. Now, Lalu Prasad is not the leader of the party. He is a father figure but the leadership of the party is in the hands of Tejashwi Yadav. The last assembly election was contested under the leadership of Tejashwi Yadav and he performed well with the RJD becoming the single largest party in the state with 75 seats.

As there is no baggage with Tejashwi Yadav, the saffron party leaders never take his name. The acceptance of Tejashwi Yadav in the society is increasing by and large and it's up to him to work hard in those areas where the party has lost elections or had a below par performance.

After 4 MLAs from AIMIM joined it, how much stronger has RJD become in Seemanchal area?

Shivanand Tiwari: When anyone leaves any particular party, its leaders always claim that the party would not get affected by his/her exit. But that is always the political dialogue. The party actually hurts after anyone leaves. I firmly believe that if any leader joins the party, it is obvious that it would benefit. There are 4 MLAs who joined the party so it is highly beneficial for us.

They are sitting MLAs and anti-incumbency factors always apply in every election against them. Hence, we always witness 50% new faces winning the polls. Now, we have 4 MLAs from Seemanchal area. They are our strength and on the basis of that we have to strengthen our position in the region.

Defeating the JD-U and the BJP combined is a challenge for the RJD:

Shivanand Tiwari: "Expanding the reach of the party is the key here for the RJD. It has its core voters in Muslims and Yadavs but its expansion is the most important aspect. If we analyse Kurmi voters would not come with you and a large chunk of Kushwaha voters support Nitish Kumar. Small castes which we call EBC voters also support Nitish Kumar as he has given reservations in panchayats and women candidates get 50% reservation. Nitish Kumar also gave 33% reservation to women in jobs.

The biggest weak point of the Nitish Kumar government is officialdom and corruption. The common people are getting harassed due to the dominance of officialdom in every department. People who were getting their job done for Rs 200 to Rs 400 in the past are now paying Rs 2000 to Rs 4000. Most importantly, there is no one to hear them. Suppose, you (Nitish Kumar) have given reservation to EBC but when they go to a department, they generally face humiliation and eventually return home without getting their work completed.

Who is responsible for religious extremism in the country and how would it impact elections:

Shivanand Tiwari: It is extremely unfortunate that the government in Delhi which has taken oath on the constitution and Narendra Modi has become the prime minister of the country. If we do not have democracy, a tea seller would not become the chief minister and he cannot think of occupying the post of Prime Minister. It is democracy that puts a tea seller in the chair of the prime minister.

Now, he should have a goal to save democracy and solve the issues if any place has problems. Our constitution lays down equality in society which this government is breaching and creating differences in society on the basis of religion. Actually, the BJP comes from the RSS. It was earlier known as Jan Sangh and became the Bharatiya Janata Party (BJP) in 1980.

The definition of Hindutva given by Veer Savarkar in 1923 for the first time is in the mind of BJP leaders. As per the definition of Hindutva, Savarkar explains that the number one citizens are those whose motherland, fatherland and places of worship (Dharmik Asthan) are in the country. Now, we have to understand that there are two religions having places of worship outside the country (Muslims have Mecca and Medina and Christians have Vatican City). Hence, they are the targets of the RSS right from the beginning. When Narendra Modi became the prime minister, he mentioned 1200 years of servitude of the country. He did not say 200 years of British servitude. Now, they are targeting the Muslim community.

Now, they are openly giving statements about killing Muslims. More alarmingly, the prime minister is silent on it. His silence on this issue means you are supporting them. So, the ruling party is encouraging extremism in the country. If there is tension in the society, it never improves.

If Narendra Modi is not there, a question mark arises on the country. If I remember, Dev Kant was a leader during Indira Gandhi's time who had coined the slogan of "Indira is India and India is Indira".

They (BJP leaders) believe that Narendra Modi is a person who has taken birth to build the country. There is a perception built in the country that if common people could suffer in the name of Narendra Modi, they are ready for it no matter what could be the reason for inflation, price rise, unemployment, corruption and others. They spread propaganda round the clock, making false videos to manipulate things and its psychological effect is on the minds of common people. Unfortunately, the opposition parties are failing to counter it.