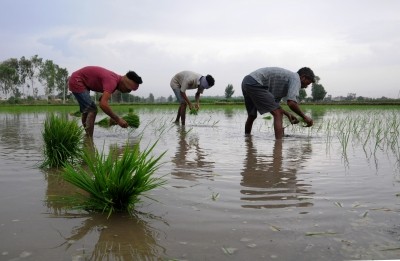 New Delhi,  As large parts of central and northwest India witnessed delayed monsoon, sowing for Kharif season's mainstay rice and oil seeds has decreased compared to last year, even as that for pulses and coarse cereals has increased, even if slightly, government data showed on Friday.

Kharif sowing has taken place over a total of 278.72 lakh hectares (ha), 15.70 lakh ha less compared to 294.42 lakh ha last year this time, a dip of 5.33 per cent. The Southwest Monsoon has had slow progress over central and south peninsular India and after a small hiatus, was active earlier this week. As of Friday, except for some parts of Rajasthan, it has covered the rest of the country.

But it is not just this year - several areas are witnessing delayed monsoon rains for a longer time now. "Rainfall has been delayed regularly for the last decade or so. (Therefore), we have seen that farmers in our belt start sowing only by June end or July first week," said N.S. Tomar, Joint Director, Gwalior division in Madhya Pradesh Agriculture Department.

"For paddy, the nurseries are done while for bajra, maize, and jowar, the sowing has started only now," he said, adding that the state has seen an increase in paddy, maize, and jowar this year.

T.N. Prakash Kammardi, former Professor and the head of Department of Agricultural Economics at the University of Agricultural Sciences, Bengaluru, pointed out how the delay in sowing will, in turn, delay production of oil seeds and cereals. "We don't yet have varieties that can deal with delay or failure in monsoon; it is high time we get such seeds."

"Also, given the changing climatic conditions, we need to keep in mind that when it comes to monsoon rainfall, uncertainty will be the rule while normal will be an exception," said Kammardi, who was also the former Chairman of the Karnataka Agricultural Prices Commission (KAPC).

The government data also showed that even sugar cane has seen a decrease with 52.92 lakh ha sown areas compared to 53.41 lakh ha last year, less by 0.91 per cent.