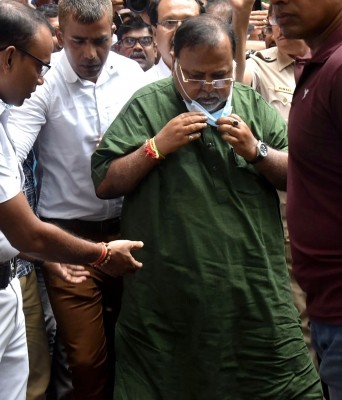 Kolkata,  A single judge bench of the Calcutta High Court on Monday rejected a plea filed by state minister Partha Chatterjee, who has been arrested by the ED in connection with the multi-crore teacher recruitment scam, for deletion of certain observations made by the same bench on Sunday relating to recruitment irregularities in the West Bengal School Service Commission (WBSSC).

On Sunday, while directing the Enforcement Directorate (ED) to take Chatterjee to AIIMS Bhubaneswar for medical check-up, the single judge bench of Justice Bibek Chaudhuri made an observation that there have been instances wherein influential ministers of the state government had taken 'shelter' at state-run SSKM Medical College and Hospital to avoid questioning by central probe agencies.

The bench also observed that if a person accused of offering government jobs against money adopts this escape route, it will do injustice to those who were deprived of legitimate jobs.

Chatterjee's counsel on Monday approached the same bench for deletion of this observation and argued that such views will make it extremely difficult for his client to get bail in any other court.

Chatterjee's counsel, Debasish Roy, argued that since it is yet to be proved that his client was a financial beneficiary in the scam, such observations of the bench need to be deleted.

However, Additional Solicitor General M.V. Raju, who appeared for the ED, placed counter arguments that if such portions are deleted from the judgement or are amended, the entire judgement will lose its relevance.

After hearing both sides, Justice Chaudhuri noted that it is not possible to explain his own judgement every other da, and rejected the plea.