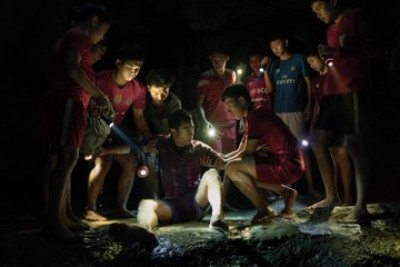 Los Angeles,  'Thai Cave Rescue', a six-part mini series about the dramatic events of July 2018 when 12 boys and their football coach were trapped in flooded limestone caves near Chiang Rai, is set to release on Netflix on September 22.

Their plight sparked an unprecedented international rescue effort that ended with the loss of just one life and a flurry of film and TV productions, reports 'Variety'.

The Netflix series is at least the fourth on-screen retelling of the rescue tale and will follow two other efforts releasing over the next few weeks. Netflix touts its series as "the most authentic and expansive retelling yet."

First into the market, in 2019, was 'The Cave', by Thai-British director-producer Tom Waller, which mixed reconstruction and news footage. It gave prominent position to Europe-based rescue diver Jim Warny playing himself. And it broke ground by clearly depicting the controversial decision to fully sedate the boys during their extraction. Despite pushback from provincial officials, who sight unseen criticised the film's depiction of their roles, 'The Cave' enjoyed a local theatrical release in Thailand from November 2019.

The National Geographic documentary, 'The Rescue', has been available on the Disney+ streaming platform since January this year. It made use of thousands of hours of body-cam footage from the actual divers and earned a BAFTA nomination.

The film was initially expected to receive a wide theatrical release. Instead, it will now have a shorter cinema release from July 29 in some countries, before transitioning to Amazon's Prime Video on August 5.

The same day, Lionsgate will give a limited theatrical and digital release to 'Cave Rescue', a re-edited version of Waller's 'The Cave'.

The Netflix series, while also a fictionalised retelling of real events, may present a different kind of authenticity. It was directed by Thailand's Nattawut 'Baz' Poonpiriya and Thai American Kevin Tancharoen.

"'Thai Cave Rescue' is the first opportunity for audiences worldwide to see the Tham Luang story in a new and more emotional light - centering the perspectives of the 12 Wild Boars, Coach Eak, and heroes like Saman 'Ja Sam' Gunan, whose lives beyond the operation remain largely outside the public spotlight," said Poonpiriya in a prepared statement.

It is the only filmic version that has been allowed access to the 12 boy members of the Wild Boars soccer team. Filming took place at the homes of the real boys and Tham Luang itself.

The Thai Film Board advised on the set-up of a special purpose vehicle, 13 Tham Luang Company Limited, through which the exclusive and lifetime rights to the boys were controlled. This ensured that each of the boys would be paid THB3 million (approximately $86,000 at current exchange rates) with additional sums paid to other organisations involved in the rescue. It then auditioned international companies that it would work with.

"I wanted to bring my experience of telling big superhero stories to the real world. One where real-life superheroes worked together for a common cause regardless of where they were from, and the only superpowers are the perseverance of the human spirit and what we can accomplish when we work together," said Tancharoen.

"For us, 'Thai Cave Rescue' is ultimately a story about family and what we decide family should be," said showrunner, writer and executive producer Gunn.