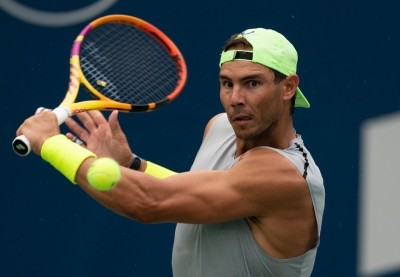 Montreal (Canada),  World No 3 Rafael Nadal on Friday withdrew from next week's National Bank Open, set to be held here, due to an ongoing abdominal issue.

The Spaniard aggravated the injury during his quarter-final clash against Taylor Fritz at Wimbledon on July 6. Despite battling through the pain to a remarkable five-set victory against the American, Nadal was later forced to withdraw from his semi-final clash against Nick Kyrgios.

Nadal requires more time to recover from the problem, prompting his withdrawal from the hard-court ATP Masters 1000 event in Canada.

"I have been practising for a while now without serving and started with serves four days ago. Everything has been going well. However yesterday, after my normal practice, I felt a slight bother on my abdominal and today it was still there," said Nadal in a Tennis Canada statement.

"After speaking with my doctor, we prefer to take things in a conservative way and give a few more days before starting to compete. I would like to thank Eugene, the Tournament Director, and all his team for understanding and supporting me and this decision. I am very sad not to finally travel to Montr�al. It's a tournament that I have won 5 times and I love to play there. I seriously hope I can come back there to play in front of the amazing crowds up there," he added.

The 36-time Masters 1000 champion Nadal is a five-time winner in Canada, with three of those titles coming in Montreal and two in Toronto.

Despite missing all of April with a cracked rib and this current abdominal issue, the 36-year-old Spaniard has enjoyed a stellar 2022 season. Nadal holds a match record of 35-3 and lifted his record-extending 21st and 22nd Grand Slam titles at the Australian Open and Roland Garros.

"We are obviously disappointed that Rafael will not be with us this year. A five-time champion of our tournament and the last men's champion in Montreal in 2019, fans were obviously eager to see him back in action at the IGA Stadium," said Eugene Lapierre, director of the Montreal Tournament.

"On the other hand, when we take a broader perspective, we still have a very strong board with the presence of 41 of the 44 best players in the world. With such a strong field, it is a safe bet that the IGA Stadium will once again showcase very exciting tennis," he added.

World No 1 Daniil Medvedev is the defending champion at the Canadian Masters 1000 event, which alternates between the host cities of Montreal and Toronto each year. This year's edition of the third-oldest event on the ATP Tour will run from August 7-14.