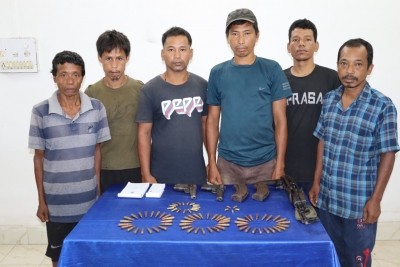 Agartala,  Four top extremists of the National Liberation Front of Tripura (NLFT-Biswa Mohan faction), who had fled from their Bangladeshi camp, surrendered to the Tripura Police with arms and ammunition on Friday, officials said.

According to the officials, they moved in the forested areas of southern Tripura and sensing their movement, special operations were launched by the Tripura State Rifles and district police forcing them to surrender to the police on Friday.

Officials said that according to the preliminary interrogation, it is revealed that NLFT-BM group is facing financial and other hardships and their survival has become difficult due to continuous pressure of security forces on their hideouts inside Tripura.