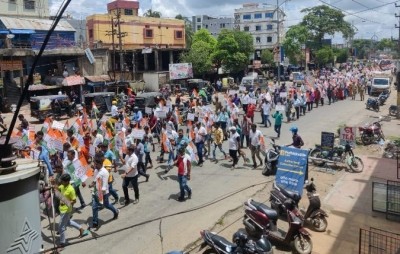 Bhubaneswar,  The Odisha Pradesh Congress Committee (OPCC) on Friday took out a protest march to Raj Bhavan against price hike of essential commodities and unemployment.

OPCC president Sarat Pattanayak led the protest march which stalled even before it could reach Raj Bhavan and the Congress leaders were detained by the security personnel.

Irate Congress activists sat on a dharna on the road.

Several Congress leaders and workers were also detained as a preventive measure by the police while trying to break the barricade in their bid to take the rally further, sources said.

Before heading towards Raj Bhawan, the Congress leaders and workers assembled before the ADM office here, where they shouted slogans against the BJP government at Centre and also against the Naveen Patnaik government, blaming it for ignoring the common people's interest.

The BJP government has imposed tax on daily necessary food items of poor people like biscuit, curd, atta, puffed rice (mudhi) and flattened rice (chuda). On the other hand, it is waiving taxes and loans of big industrialists, alleged Pattanayak.

The Centre should immediately withdraw the inflated rates of goods and other items for the wellbeing of common people. Poor should be tax free, he said.

"The BJP and the BJD, through alliance, imposed GST on food items of poor people. The BJP had made a poll promise to provide jobs to two crore people in the country every year, but around 15 crore youth have been unemployed in the last eight years during its rule," alleged another Congress MLA Suresh Routray.

Commenting on the protest of Congress, BJP leader Prithiviraj Harichandan said the party is trying to create an unruly environment in the country to give protection to their leaders Sonia and Rahul Gandhi on the National Herald case.