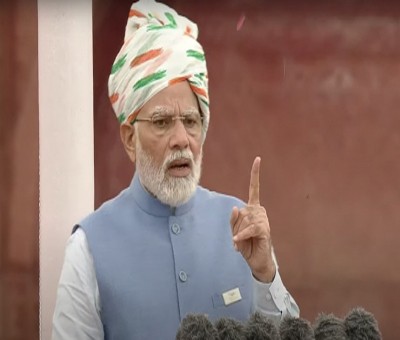 New Delhi,  A day after the BJP blamed first Prime Minister Jawaharlal Nehru for the partition, Prime Minister Narendra Modi mentioned his name in his speech while paying tributes to the freedom fighters who fought for the nation during his Independence Day speech from the ramparts of the Red Fort.

But, before mentioning Nehru, Modi paid tributes to Savarkar and said the people of the country are thankful to Bapu, Netaji Subhash Chandra Bose, Babasaheb Ambedkar, Veer Savarkar who gave their lives on the path of duty. "Kartvya path hi unka jeevan path raha," he said.

The Prime Minister also mentioned Bhagwan Birsa Munda, Sidhu Kanhu, Alluri Sitaram, Raju, Govind Guru -- "there are many names who became the voice of the freedom struggle and had inspired the tribal community to live and die for mother nation."

He said every Indian is filled with pride when they remember the strength of Rani Laxmibai, Jhalkari Bai, Chennamma, Begum Hazrat Mahal.

Arriving at the Red fort, PM Modi inspected the guard of honour while Mi17 helicopters showered petals during the event.