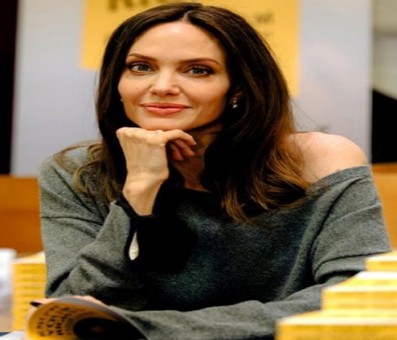 Los Angeles,   Hollywood star Angelina Jolie, who is known for her humanitarian work, wants the world to take cognizance of what's happening with women in the theocratic state under Taliban ruled Afghanistan.

The 'Girl, Interrupted' star recently wrote in an op-ed in 'Time' magazine, where she recalled her experience of meeting an Afghan refugee woman in Rome. She wrote, "I recently met a young Afghan refugee in Rome who had been months from qualifying as a doctor when the Taliban overthrew the Afghan government in August 2021. Her older sister was studying dentistry at university. Her two younger sisters were doing brilliantly in school."

It's been a year since the Biden administration, acting on Donald Trump's order, withdrew U.S. troops from Afghanistan resulting in Taliban's takeover of the country. The US-Taliban deal or the Doha Agreement laid the foundation of the U.S. troops' exit from the country and subsequent takeover of Afghanistan by Taliban. The deal was signed without taking the Afghan government into consideration.

Angelina wrote about the horrors emanating from the oppressive regime, "Overnight, they (the Afghan refugee and her family) and 14 million other Afghan women and girls lost their right to go to high school or university, their right to work, and their freedom of movement."

"As we spoke, she hugged her father, who'd worked for decades as an expert in rural development in Afghanistan. He left everything behind when he fled with his family. With tears streaming down her face, she told me that she wasn't sad for herself, but for all the women of her country", Angelina wrote in her article for 'Time'.

She opined that the progress witnessed by Afghan women "has been overturned with unimaginable speed."

"The daughters of Afghanistan are extraordinary for their strength, resilience, and resourcefulness," she added.

She then laid out the treatment of Afghan women under the oppressive regime, including public beatings, political imprisonment, kidnapping and forced marriages to Taliban leaders, in her piece.

"Yet despite the dangers, the greatest resistance to the reversal of women's rights in Afghanistan has not come from foreign powers, but from Afghan women themselves, who have taken to the streets," Jolie wrote.