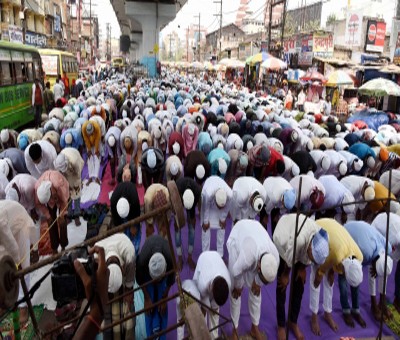 Shahjahanpur (Uttar Pradesh),  Vishwa Hindu Parishad (VHP) activists in Uttar Pradesh's Shahjahanpur district made a group of Muslim pilgrims from West Bengal apologise for offering namaz by the roadside before they were allowed to continue their journey to Ajmer Sharif Dargah (Rajasthan).

A video clip, purportedly of the incident, showed some men holding their ears in a gesture of apology. A couple of them were seen doing sit-ups.

Superintendent of Police (Shahjahanpur), S. Anand confirmed that a few people from West Bengal travelling to Rajasthan in a bus were found offering namaz on the road under Tilhar police station limits in Shahjahanpur.

The Muslim pilgrims were issued challans and then left for their journey ahead, he added.

Additional Superintendent of Police, Sanjeev Vajpayee, told reporters, "Eighteen people, who were on their way to Ajmer Sharif Dargah, were brought to the Tilhar police station with the complaint that they were offering namaz on the roadside. These people were released after they gave a written apology and were issued a challan."

Local VHP leader Rajesh Awasthi, who reported the matter to police, said, "I was on my way to some place when I saw some men offering namaz on the roadside."

Awasthi added that he told them that they were in Uttar Pradesh, where offering namaz in the open was prohibited.

In a video that surfaced on social media, the VHP members were purportedly heard asking some passengers of a bus to hold their ears and apologise.