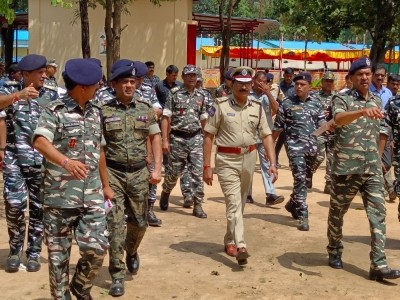 Hyderabad,  The Central Reserve Police Force (CRPF) and the Telangana Police have set up a Joint Task Force camp at Chennapuram near the Telangana-Chhattisgarh border for anti-Maoist operations.

The camp will be used by teams of the CoBRA, District Reserve Guard (DRG), and the Greyhounds as a launch base for anti-Maoist operations, according to a statement from the DGP's office here. The camp will prove to be a milestone in the penultimate battle against the Maoists, it added.

Commando Battalion for Resolute Action (CoBRA) is anti-Maoist battalion of the CRPF. The DRG is a unit of Chhattisgarh Police engaged in operations against Maoists. Greyhounds is the elite anti-Maoist force of Telangana Police.

The Joint Task Force camp is part of the coordination between the states and the CRPF in tackling Maoists.

This is likely to help all the three forces to carry out coordinated operations against Maoists on the border between Telangana and Chhattisgarh.

Though the Maoist violence has drastically come down in Telangana in recent years, the area near Chattisgarh border has been witnessing some Maoist activity. Telangana Police have stepped up the vigil to stop Maoists from crossing over into the state from Chhattisgarh.