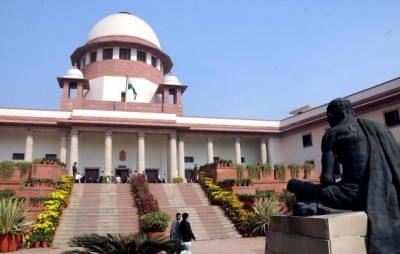 New Delhi,  In a landmark decision, the Supreme Court on Wednesday allowed the Board of Control for Cricket in India's (BCCI) plea in connection with the amendments proposed to its constitution to relax the cooling-off period requirement.

Accordingly, the cooling-off period for office-bearers will kick in after two consecutive terms at either the BCCI or at the state association level. So the office-bearers can now have a maximum of 12 years at one go: Two three-year terms at the state association level and two three-year terms at the BCCI, and after this, the cooling-off period will be applicable.

The decision will allow the current set of office-bearers led by BCCI President Sourav Ganguly and Secretary Jay Shah to be in office until 2025. Ganguly and Shah had already served one term each at the state and BCCI level and would have been disqualified under the existing rule.

However, they can now serve an additional term at the BCCI.

The whole conflict between the BCCI and Supreme Court had started long ago and has seen a lot of twists and turns.


Here is a timeline of how things unfolded over the last nine years:

In May, three Rajasthan Royals players -- S. Sreesanth, Ankeet Chavan and Ajit Chandila -- were arrested on spot-fixing charges, which revealed a nexus between franchise members, players and bookies. A follow-up probe then led to the arrest of Gurunath Meiyappan, team principal of Chennai Super Kings (CSK).

Thereafter in October, the Supreme Court appointed a committee headed by Justice Mukul Mudgal to look into the spot-fixing scandal.

In January, the apex court appointed a panel headed by retired justice R.M. Lodha to suggest reforms for BCCI as well as determine punishments for those guilty in the IPL spot-fixing case.

After six months, the Lodha panel suspended CSK and Rajasthan Royals for two years and handed a lifetime ban to their owners. However, the players of the two franchises were allowed to be auctioned/played for other franchises.

In January, the Lodha panel recommended a complete overhaul of the BCCI structure. Apart from that, other major recommendations included one-vote-one-state criteria, limiting tenure of office-bearers, separate players' association for men and women, and barring ministers over 70 from holding any position in the board or state associations.

The panel also gave BCCI time till January 31 to come back with suggestions. But no response from the board forced the panel to approach the Supreme Court. In the very next month, the apex court gave BCCI the deadline of March 3 to respond to Lodha panel's suggestions and the BCCI filed its response and objections to the report in a 55-page counter-affidavit.

In a plea to the Supreme Court, the panel then asked for replacing BCCI top bosses and a bench headed by then Chief Justice T.S. Thakur also slammed the board's attitude. In a special general meeting in October, BCCI deliberated on the Lodha panel recommendations but made no mention of key reforms such as age and tenure of office-bearers or the one-state-one-vote policy in its statement.

The Supreme Court then decided to pass an order on the issue of implementation of directions of the Lodha panel after BCCI declined to give an unconditional undertaking. However, the BCCI remained defiant on implementing the key reforms.

On December 15, 2016, the top court said there is, on first impression, a charge of perjury that can be laid against then BCCI President Anurag Thakur and the board's General Manager for game development, Ratnakar Shetty, for lying under oath.

On January 30, the court appointed four eminent personalities from varying backgrounds to oversee the running of the BCCI until the board can hold fresh elections for office-bearers as per the Lodha committee's recommendations.

The BCCI adopted a newly-drafted constitution, which was finalised post the court's judgement by Justice Chandrachud that an office-bearer who has held any post for two consecutive terms (six years) either at a state association or in the BCCI, or a combination of both, shall not be eligible to contest any further election without completing a cooling-off period of three years.

During the cooling-off period, the person cannot serve in any capacity at both the BCCI or state level.

In October, former India captain Sourav Ganguly was elected as BCCI President and Jay Shah as Secretary, ending the 33-month reign of the Supreme Court-appointed Committee of Administrators. Arun Dhumal was elected as Treasurer while Jayesh George took charge as Joint Secretary.

The BCCI administration approached the court seeking several significant amendments to the board's constitution, which would roll back the sweeping reforms passed by the court in 2016 on the basis of the Lodha panel's recommendations.

The changes sought by the BCCI included tweaking the cooling-off period of office-bearers, modifying the disqualification criteria, giving unprecedented power to the BCCI Secretary, and stopping the court from having any say if the board wants to alter the constitution.

As per BCCI, the existing cooling-off period was a "restriction", which was "proving to be a big blow to selecting talented and experienced hands". The BCCI said the cooling-off period must be applied only after the individual has finished six years at one place - the BCCI or the state association - separately.

A two-judge bench of Justices D.Y. Chandrachud and Hima Kohli passed orders to this effect on Wednesday, modifying its 2018 judgement.

The court agreed to tweak the existing rule on the cooling-off period by allowing an office-bearer to hold office for two terms at one place - the state association or BCCI - while removing the clause of combination of both.