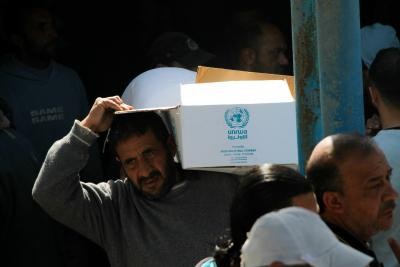 Gaza,  The annual Arab financial aid to the United Nations Relief and Works Agency for Palestine Refugees (UNRWA) had declined to 3 per cent of UNRWA's budget in 2022, a UN advisor said.

Adnan Abu Hasna, the media advisor of UNRWA in the Gaza Strip, told reporters on Saturday in Gaza city that in 2018, the Arab financial support to the UN agency reached $200 million, Xinhua news agency reported.

Abu Hasna said that during all the previous Arab summits, the Arab League agreed that Arab support for the UN agency should not be less than 7.5 per cent, "but today we have seen it decline to 3 per cent ... this is a big problem."

He added that UNRWA is trying hard, with the help of UN Secretary-General Antonio Guterres, to restore contact with many Arab countries that have suspended and reduced their financial aid.

Abu Hasna said that the UN agency is counting on the success of the meeting of the donor countries, which will be held in New York on the sidelines of the meetings of the UN General Assembly.

"We hope to mobilise the required and enough financial support that would cover UNRWA's financial deficit, which has reached $100 million," he added.

He warned that "if there are no financial developments after the conference, the crisis will intensify in the coming months of November and December."

UNRWA was established as a UN agency by a decision of the General Assembly in 1949 and was mandated to provide assistance and protection to Palestine refugees registered with it in the agency's fields of operations.