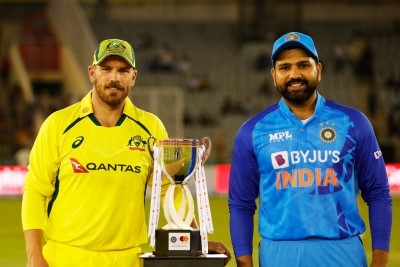 Mohali,  Australia captain Aaron Finch won the toss and opted to bowl first against India in the first T20I of the three-match series at the Punjab Cricket Association IS Bindra Stadium, here on Tuesday.

Speaking at the toss, Australia skipper confirmed that Cameron Green will open the batting along with him. All-rounder Tim is making his Australia debut. He received his Australia cap from his Hobart Hurricanes team-mate Matthew Wade.

"We're going to have a bowl first. It is about building up to the World Cup, and about getting some information about our boys. Really excited. You expect to be tested, hopefully some dew comes out. The pitch looks hard and flat," said Finch.

On the other hand, India skipper Rohit Sharma informed that Jasprit Bumrah and Rishabh Pant are not playing Tuesday's game.

"It is an opportunity to test ourselves. Every game is a big game to learn. We got to learn so much in the last six-eight months on how to win games. This series will be no different for us to express ourselves. Looking at what happened in the Asia Cup, we had a chance to reflect on where we went wrong. This gives us an opportunity to correct ourselves as a group. Nothing changes in terms of our approach," said Rohit.

"Unfortunately there are some injuries in the squad. Bumrah is not playing, he will take a game's break and probably come back in the second and the third game. We have Axar and Chahal. Pant misses out," he added.