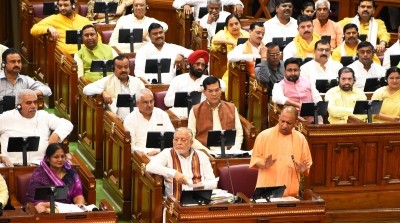 Lucknow,  While a substantial number of men stayed away from the UP Assembly on Thursday, the women members celebrated the special 'Shakti Satra' earmarked for them.

Women members -- even though most of them were apparently not well versed with the rules of the Assembly -- spoke extensively on women empowerment and one of them even sang a song while others recited poetry to prove their points.

Earlier, at the beginning of the special day for women members, Chief Minister Yogi Adityanath said that it was a historic day for the state legislature when a session had been set aside exclusively for women members.

He said that such an initiative should have been taken earlier and urged Speaker Satish Mahan to relax rules and allow the women members to speak as much as they wished to.

He spoke at length about "nari shakti" and the schemes that his government had started for women empowerment.

Leader of opposition, Akhilesh Yadav, said that changes were becoming visible and the contribution of women in various fields could no longer be ignored.

He said that Uttar Pradesh had given the first woman chief minister Sucheta Kriplani and today, women were holding important positions, including that of President and UP Governor.

Expressing concern over crime against women, Akhilesh underlined the need for implementing zero tolerance policy on the issue so that the results are effective.