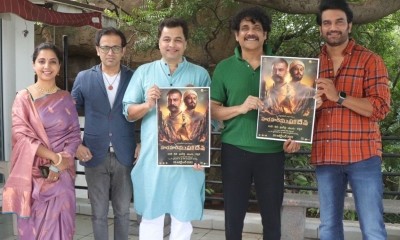 The actor, who was recently seen in 'Brahmastra', went back in time and recollected his experience of getting to know Chhatrapati Shivaji Maharaj as the film is based on the equation between Maharaj and his commander Baji Prabhu Deshpande, both of whom valiantly fought in the Battle of Pavan Khind.

Commenting on the occasion, Nagarjuna said, "Since my childhood I remember reading about Chhatrapati Shivaji Maharaj's history, what kind of a person, and what kind of king he was, What a benevolent king he was."

He expressed his happiness over the film being brought to Telugu audience, "I'm so happy they are bringing his story to the Telugu people and also about his friend and commander Baji Prabhu Deshpande about his story, their relationship, and how brilliantly Baji Prabhu Deshpande fought so that Chhatrapati Shivaji Maharaj could get into safety and went against 12,000 enemy army just with 300 soldiers and with this he made sure that his king was safe and I am really looking forward to this story and seeing this film."

"Now India has become a smaller place as far as language is concerned, everybody is watching everything everywhere, if the content is good they will like it and I think this is one such content. I am very pleased and happy to launch the poster of 'Har Har Mahadev'," he concluded.

Produced by ZEE Studios and Shri Ganesh Marketing and films, 'Har Har Mahadev' is set to debut in cinemas on October 25.