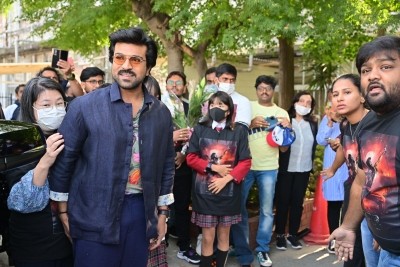 Ahead of the movie's theatrical release, Ram Charan, who plays the central role in the film along with Junior NTR, has been busy meeting up with his fans and admirers over there. Rajamouli and Junior NTR are also in Japan for the promotional trip.

As part of his promotional activities, Ram Charan and his wife Upasna visited the India International School, Tokyo, where he was warmly welcomed by the students.

The enthusiastic fans spent quality time with him and also gave him soft toys that resembled his pet, Rhyme, as a loving gesture.

The movie, which has been the No. 2 grosser of 2022, is releasing on Friday in Japan.