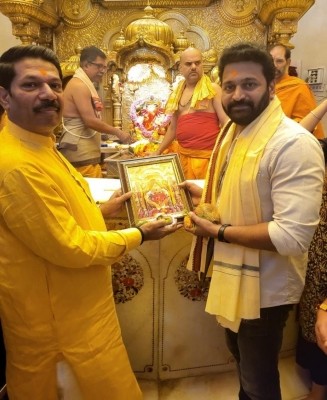 Mumbai,  Actor-director Rishab Shetty, who has been garnering rave reviews for his recently released movie 'Kantara', recently sought blessings at the iconic Siddhivinayak Temple in the Prabhadevi area of Mumbai.

As Rishab Shetty visited the famous Siddhivinayak Temple in Mumbai along with his team, he witnessed a huge crowd of fans mobbing him at the temple. The actor was seen in a simple attire wearing a white shirt and jeans.

'Kantara' has created a big buzz for both right and wrong reasons. It film has emerged as a box-office winner, breaking into new territories, and several senior members of the fraternity, including Rajinikanth, have heaped praise on Rishab.

At the same time, the film has stepped on a plagiarism landmine with a Kerala-based fusion rock band Thaikkudam Bridge accusing the makers of ripping off their track 'Navarasam'.

Recently, the Kozhikode Sessions Court had issued an injunction barring the makers of the film from playing the allegedly plagiarised song 'Varaha Roopam' in theatres and other streaming platforms.