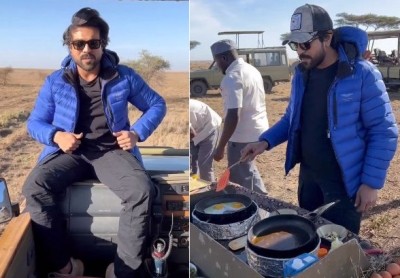 Hyderabad,  After a hectic 'RRR' promotion tour in Japan, actor Ram Charan has hit the safari trail in Africa. The actor is currently in Kenya, taking in the sights and sounds of the rich wildlife from close quarters.

Ram Charan is vacationing in the most untouched and untamed part of Africa with his family and friends, and appears to be enjoying every moment in the lap of nature.

In a video doing the rounds on social media, the actor could be seen driving around, cooking eggs along with the locals and also taking pictures of big cats in their natural habitat.

Ram Charan and his wife Upasana had earlier shared pics of their sojourn in Japan. The actor, along with co-star Jr NTR, and 'RRR' director S.S. Rajamouli had toured Japan to promote the movie, which recently had its theatrical release there.