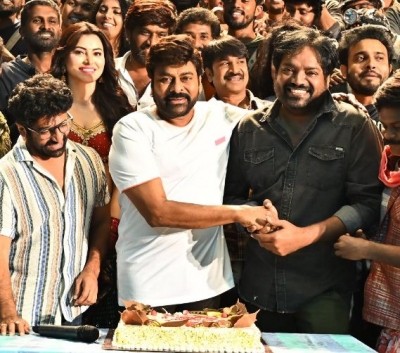 Chennai,   Meher Ramesh, whose birthday falls on Sunday, thanked fellow director Bobby for having planned a birthday surprise for him along with Telugu superstar Chiranjeevi.

On Sunday, Telugu Megastar Chiranjeevi celebrated director Meher Ramesh's birthday on the sets of his upcoming film 'Walter Veerayya', which is being directed by Bobby.

Taking to Twitter, Bobby posted pictures of Meher Ramesh's birthday celebrations on their sets along with their unit.

He said, "Wishing dearest Meher Ramesh anna a very happy birthday. Super happy to celebrate your birthday on our 'Waltair Veerayya' sets along with boss Chiranjeevi. May you be blessed with the best of everything. Have a blockbuster year ahead."

Visibly moved by the entire unit of Chiranjeevi's 'Walter Veerayya' celebrating his birthday, Meher Ramesh responded to Bobby's tweet saying, "Dear brother Bobby, thanks a lot for the birthday surprise along with our boss 'Waltair Veerayya'.

"The way you are presenting Mega Star Mass Avatar (sic). Devi Sri Prasad (has given) rocking songs. Mythri Movie Makers' production values (are) going to be sureshot blockbuster for Sankranthi."

After completing director Bobby's 'Walter Veerayya', Chiranjeevi is expected to move on to director Meher Ramesh's 'Bholaa Shankar', which is the Telugu remake of the Tamil superhit film, 'Vedalam'.