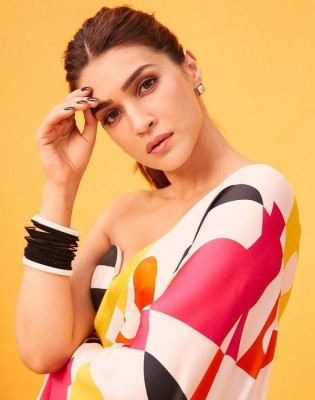 Mumbai,  'Bhediya' actress Kriti Sanon said that she used to sing 'Tu Kitni Achi Hai' for her mother during her childhood days. The 'Bareilly Ki Barfi' actress also called her mother a 'superwoman' as she always stood by her and motivated her to grow in life.

After witnessing the performance of Debosmita Roy on the iconic song 'Tu Kitni Achi Hai' from the 1968 film 'Raja Aur Runk', the 32-year-old actress got emotional and talked about the importance of her mom Geeta Sanon and her words always inspires her.

Kriti said: "Your voice is so beautiful Debo, it has a purity. I was just looking at your mom and she is quite emotional. What I feel is internally she is very much strong and I think every mother is a strong lady which we never notice. During my childhood days, I used to call my mother a 'Superwoman'."

Kriti is coming along with her 'Bhediya' co-star Varun Dhawan to promote her film which is a comedy horror film. The story revolves around Bhaskar, played by Varun, who turns into a wolf on full moon nights. While the star cast enjoyed performances by the contestants on 'Thank You Maa' special episode, Kriti Sanon also shared memories associated with her mother and how she used to sing the same song for her mother.

She added: Wherever I go, whether it was my school exams, she used to make sure I am reaching school on time, she took me to dance classes, and she could do anything and everything for me and I used to always think of where she gets so much energy. The way you sang took me back to my childhood. When I was a child, my sister and I used to sing this song for our mother."