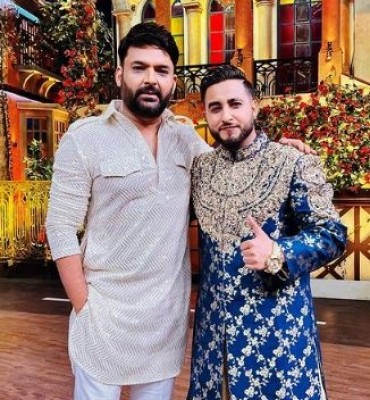 Mumbai,  Punjabi singer and lyricist Khan Saab, known for his compositions like 'Zindagi Tere Naal', 'Jee Kharda', 'Rim Jhim', 'Sajna', 'Narazagi' among others, shared how he got his stage name.

The artiste, whose real name is Imran Khan, said on 'The Kapil Sharma Show' that the name was given to him by Gurmukh Singh Sandhu, popular by his name Garry Sandhu, who is a Pujabi rapper and actor. He made his singing debut in 2010 with 'Main Nahi Peenda' and also worked in Punjabi movies such as 'Romeo Ranjha'.

Khan Saab shared :"My real name is Imran Khan which was given to me by my family. But while working with Garry Sandhu Paji, he would refer to me as 'Khan'."

The singer said that while he was recording for the track 'Rhim Jhim' along with Garry, he asked him the name by which he can call him and then he said that as he always referred to him as Khan Saab so this could be his name because there is already a singer with the name Imran Khan.

"While recording 'Rim Jhim', he came up to me and asked me what name we should keep for you as there was already a famous singer named Imran Khan. But as he used to call me �Khan' or �Khan Saab' all the time, I decided to stick to it and that's how Khan Saab came into existence. I am really thankful to Garry Paji for giving me this name, I will be forever grateful to him," he added.