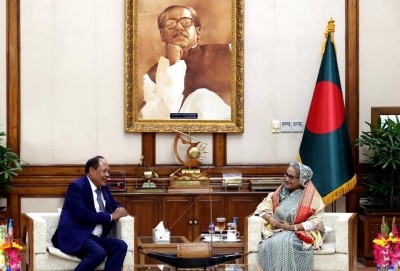 She made the remarks on Sunday during a meeting with Speaker of the Assam Legislative Assembly, Biswajit Daimary at her official Ganabhaban residence in Dhaka.

The Speaker led a four-member delegation which is part of a team of 32 MLAs from the northeast visiting Bangladesh.

Hasina also mentioned the connectivity routes which were closed during the 1965 war, saying the routes were now being opened in phases.

The Prime Minister also expressed gratitude to the contribution of the northeastern statesand West Bengal for sheltering the freedom fighters and refugees from Bangladesh in 1971.

Laying emphasis on regional cooperation, the premier said that Nepal, Bhutan, and India's northeastern states can use the Chittagong air and sea ports, as well as Syedpur airports for mutual benefits.

On his part, Daimary called his trip to Bangladesh fruitful, adding that the people of Assam will be benefited from cooperation from the neighboring country.

He said said Assam wants Bangladeshi experts' cooperation in the agriculture sector as the country has huge experience in this regard.

The delegation also stressed the need for strengthening people-to-people contact as well as trade and commerce in the region.