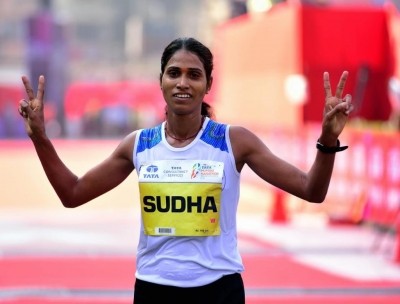 Pune,  Former Asian Games gold medallist and Arjuna awardee, Sudha Singh, joins as the brand ambassador for the third edition of the Bajaj Allianz Pune Half Marathon (BAPHM), which is set to run on November 27.

The two-time Olympian for 3000-meter steeplechase has also participated in various half marathon events during her long international career, spanning 13 years. She has won multiple medals for India at the continental level.

The BAPHM, the marquee event of Pune's long distance running calendar is making a comeback this year after a pandemic induced two-year hiatus and has announced Rs 10 lakh price for national records in the half marathon category for both men and women.

Commenting on the development, Vikas Singh, CEO, APG Running and fitpage, said, "It's really an honor for the BAPHM to have Sudha Singh, one of India's greatest distance runners as its brand ambassador this year. The BAPHM is an equal opportunity race and we are certain that Sudha's involvement would inspire many more women to come forward and take up distance running as a career. Even better if that career would begin at the BAPHM."

Sudha has been competing in marathons domestically and recently won the 37th All-India Indira Gandhi Prize Money for a marathon in Prayagraj, Uttar Pradesh, in the women's category.

This year, the BAPHM has also declared a prize money of approximately INR 28 lakhs, up from INR 21 lakhs from the second edition, to be won across its race categories. The BAPHM promotes Indian runners and so all prizes are reserved for Indian citizens only. It features primarily four categories, which include the half marathon (21.1 km), a 10 km run, a 5 km run and a 3 km (family and fun) run. Registrations for the BAPHM have been on since the beginning of the month and so far more than 13,000 runners have already registered to participate.