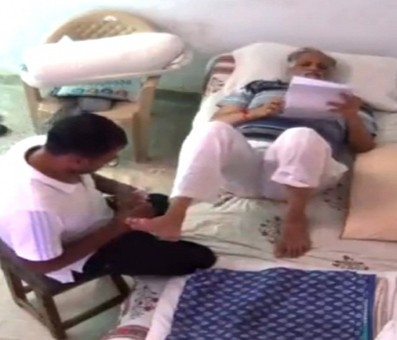 New Delhi,  A Delhi court is hearing jailed minister Satyendar Jains plea against the Tihar jail authorities for not providing him basic food items and to restrict the media from airing video footage from inside his jail cell.

Appearing for Jain, Senior Advocate Rahul Mehra pointed out to Special Judge Vikas Dhull that despite a hearing on the matter on Tuesday, more footage was leaked on Wednesday morning.

He added that every day video footage was being leaked. However, according to the special judge, no application was made on behalf of Jain relating to this issue. Consequently, an application came to be filed seeking to restrain the media and for an inquiry to be conducted on how the leak took place.

These statements came while the court was already hearing a plea by Jain against the Tihar jail authorities for not providing him basic food items as per his religious beliefs and not allowing any medical check-up, which is said to be due from last month.

Mentioning the fact that Jain is still an undertrial prisoner and not a convict, the plea states that he cannot be treated this way and made to starve or relinquish his religious beliefs and be denied his basic medical needs.

The plea also brought to notice that for the last 12 days the jail authorities have stopped serving him raw fruits, vegetables and dry fruits, prescribed by his doctors.

Post-filing of the jail authorities' detailed response, the hearing in the matter will continue on Thursday.

On Tuesday, Mehra had urged the court to ensure that Jain is given a fair trial while accusing the Enforcement Directorate (ED) of leaking footage from inside Jain's jail cell to the media.

The court had agreed to continue hearing the contempt plea against the ED on November 28.