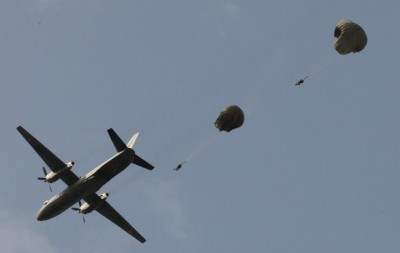 Kolkata,  An assistant leader of the Special Frontier Force (SFF), a covert Special Forces unit under the operational control of the Army, has been killed in north Sikkim after his parachute malfunctioned during a training session near the India-China border.

According to a source, Lhagyal (40) was an experienced paratrooper with over 100 jumps (including free falls) under his belt. A resident of Sikkim, he was recruited to the 6 Vikas Battalion of SFF in July 2000.

The incident happened on Monday.

"This happened during an exercise. The SFF personnel were dropped from a Mi 17V5 helicopter. Unfortunately, the left clip of Lhagyal's parachute malfunctioned midair and he plummeted down several thousand feet into a mountainous ravine. His lifeless body was recovered and taken to a local hospital where he was declared dead on arrival. Lhagyal's body was then sent to the North Bengal Medical College and Hospital for an autopsy. On Tuesday, it was handed over to the Army," an official said.

Lhagyal's mortal remains have been handed over to his family who live in Ravangla, a small town in south Sikkim. His last rites will be conducted with full military honours, the official added. An inquiry has also been initiated as to why the parachute malfunctioned and why Lhagyal was unable to activate his spare chute.

The elite SFF, also known as the 'Phantoms of Chittagong' after their role in the 1971 Indo-Pak War, remained largely under cover till recently. This was due to the covert nature of their operations under India's Research & Analysis Wing (RAW) that reports directly to the PMO. It was only after the recent confrontation between India and China along eastern Ladakh that news of this unit became public. Personnel of the SFF assisted Indian Army troops in climbing up mountain peaks that overlooked Chinese positions.

It was during one such operation in August 2020 that Subedar Nyima Tenzin of the SFF was killed after he accidentally stepped on an old landmine to the south of Pangong Lake. The news of his death and last rites were widely circulated by the Army in a bid to give recognition to this unit that originally comprised of Tibetan refugees who fled to India after China's takeover of their country.