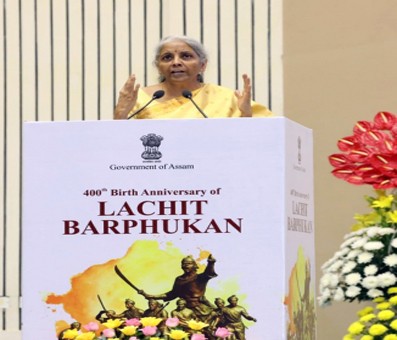 Speaking at the event, Sitharaman congratulated the Assam government for making a comprehensive attempt for the first time in making the rest of the country aware of a personality as towering as Lachit Borphukan.

"It is important for every Indian to know about his indomitable display of valour and courage, along with strategy, on the battlefield," she added.

The Union Finance Minister appealed to the government of Assam to organise similar events highlighting the Ahom era in various parts of the country.

Sitharaman said: "I would request the Union Ministry of Culture to cooperate with the state government in this regard."

The Finance Minister also cut the ribbon to mark the inauguration of an exhibition displaying artifacts starting from the reigns of Kumar Bhaskar Varman.

Appreciating the tradition of writing chronicles, called "buranjis", and the architectural uniqueness as is found in the "moidams" of Charaideo, she requested the government of Assam to take all necessary measures for the preservation and protection of this cultural heritage.