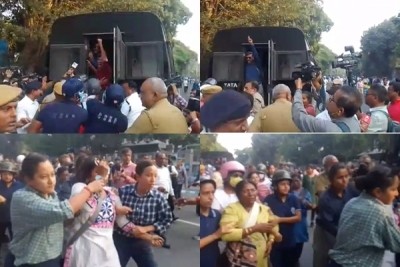 Kolkata,  A major ruckus broke out in front of the Assembly premises and adjoining areas in Kolkata on Wednesday following a scuffle between police personnel and state government employees after the latter staged a protest march over pending dearness allowance (DA) arrear payments.

The matter of DA arrear payments is currently in the Supreme Court after the state government had challenged an earlier order of the Calcutta High Court directing it to clear the pending DA arrears within a specific period.

On Wednesday, large number of state government employees started marching towards the Assembly, protesting against the delay in DA arrear payments, which the Calcutta High Court has already described as the employees' 'right'.

A huge police contingent was present there to stop them reaching near the Assembly gates.

However, as the protesters started approaching the Assembly, breaking through the police barricades, a scuffle broke out between the agitators and the security personnel.

Soon the police resorted to lathi charge, causing injuries to many protesters. Some police personnel, including a deputy commissioner, an inspector and an assistant sub-inspector, were also injured in the clashes.

The West Bengal government has repeatedly cited cash-strapped exchequer as the reason for delay in DA arrear payments.