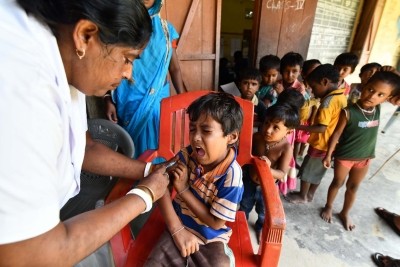 New Delhi,  Amid the upsurge in measles cases across many states, the Centre on Wednesday told all states to administer one additional dose of measles and rubella control vaccine (MRCV) to all children, aged between 9 months to 5 years, in vulnerable areas.

"Recently, increased numbers of measles cases are being reported from certain districts of Bihar, Gujarat, Haryana, Jharkhand, Kerala, and Maharashtra. A rapid rise in number of cases and some mortality due to measles has also been observed specifically in the Brihanmumbai Municipal Corporation (BMC) and certain other districts of Maharashtra," Joint Secretary, Health, Dr P. Ashok Babu, said in the letter.

In this context, a meeting of domain knowledge technical experts was held on Wednesday under the chairpersonship of Member, Health, NITI Aaayog, Dr V.K. Paul, to review the situation.

The Centre said that based on inputs from experts as well as WHO's South-East Asian Regional Office and WHO India Office in the meeting, states/UTs are advised to consider, "administering one additional dose (special dose for measles and rubella for Universal Immunisation Programme (UIP) Reporting Purposes) of MRCV to all children of 9 months to 5 years in vulnerable areas (geographies which are showing recent increase in numbers of measles cases) to be identified by the state government/UT administration in 'Outbreak Response Immunisation' (ORI) mode".

This dose would be in addition to the primary vaccination schedule of first dose at 9-12 months and second dose at 16-24 months, the letter said. One dose of MRCV is to be administered to all children aged 6 months and up to less than 9 months in those areas where the measles cases in the age group of less than 9 months are above 10 per cent of the total measles cases, to be identified by the state government/UT administration, the letter said.

"Since this dose of MRCV is being given to this cohort in 'Outbreak Response Immunisation' (ORI) mode, therefore, these children should also be covered by first and second dose of MRCV as per the primary (routine) Measles and Rubella vaccination schedule." it added.

The letter also said that as per the WHO & UNICEF estimates (WUENIC estimates 2021 of Immunisation Coverage), the first dose coverage of MRCV is 89 per cent and that of second dose is 82 per cent, nationally. lndia is committed towards elimination of measles and rubella by December 2023.

The Centre has also advised states to earmark wards and beds for effective caseload management of measles in dedicated health facilities for timely transfer and treatment of such children.