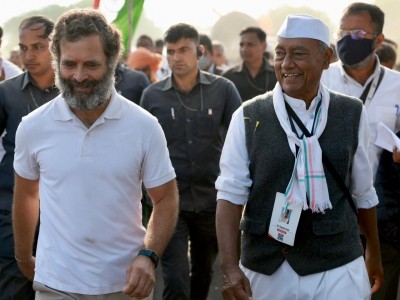 The very first day foot-march began at 6 a.m. on Wednesday after taking over the yatra flag from Maharashtra Congress Chief Nana Patole and concluded as per its scheduled time at 7:30 p.m.

While addressing a large gathering at Burhanpur, Gandhi on Wednesday said that the main purpose of the Congress's Bharat Jodo Yatra is to remove fear from the minds of farmers, labourers and youth.

"Purpose behind this long journey to speak is against hatred, violence and fear that is being spread in India. See, what is the way of the BJP. First of all spread fear among people. By not paying the crop insurance money and by not waiving off the loan. Fear in the hearts of the workers. By not giving MGNREGA money. First they spread fear and later it turns into violence," the former Congress President said.

The second day's (November 24) march will resume at 6 a.m. from Borgon and will enter in Khandwa district of Nimar region where padyatris will have breakfast. Meanwhile, Gandhi will visit tribal leader Tantya Mama's birthplace in Nimar, who was the region's first tribal leader and is worshipped as god by tribal communities.

There the former Congress President will also address a gathering of tribal people.

Gandhi is scheduled to visit Pandhana-Gurudwara Sahib in Khandwa and the night halt for 'Bharat Jodo Yatra' participants is scheduled at Kherda in Khandwa, a Congress leader told IANS.