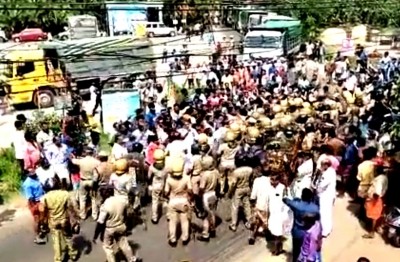 Thiruvananthapuram,  Tension prevailed at Vizhinjam area in Kerala capital on Sunday after a group of protesters -- opposed to the Vizhinjam port project, overturned police vehicles and also injured two policemen.

In an attempt to control the situation near the Vizhinjam port, the police resorted to cane-charge, and also released tear gas shells.

According to sources, many people have been injured.

The protesters, earlier on Sunday, surrounded Vizhinjam police station, demanding release of five persons who were taken into custody following clashes on Saturday.

Some media personnel were also injured when the protesters allegedly assaulted those who were filming the demonstrations.

The police have registered an FIR against the Archbishop of the Latin Archdiocese of Thiruvananthapuram, Thomas J. Netto, naming him as the first accused.

Sources at Vizhinjam police station told IANS that a high-level meeting between the priests and police officers was held in a bid to find out ways to defuse the tension in the area.

The protesters want the port project to be called off even as the Kerala High Court has directed the work on the project be resumed.

The state government is keen to complete the Vizhinjam port work.

The CPI-M, BJP, and the influential SNDP of the backward-class Ezhava community are backing the port project.

They have also staged demonstrations in support of the port project.

The Thiruvananthapuram City Police have deployed more than 200 police personnel to face any eventuality at the Vizhinjam police station.